ok
Brettonputter.com uses cookies to ensure you get the optimal experience while using this website. Learn more
X

CEOs of startup and high-growth companies talk about how they use use their culture to achieve massive competitive advantage.

Explore the tools and techniques that leaders from companies like Next Jump, Adaptive Insights, Algolia, Angellist, SalesLoft and Thread use to:

Define, embed and manage their culture
Create a values-driven interview process
Build proactive learning environments
Create transparent, trusting and psychologically safe cultures
Invest in diversity and inclusion
Deal with brilliant jerks and bad hires
Develop employee feedback as a means to build adaptability into their organizations
Sign up to receive pre-launch chapters and be notified when the book is published.
Thank you! Your submission has been received!
Oops! Something went wrong while submitting the form

Every high-growth startup founder should read this book. Using his 17 years of experience working with high-growth companies, Brett has put together a playbook for Founders to build great company cultures, and consequently great companies, from day one.
Romanie Thomas CEO, JuggleJobs 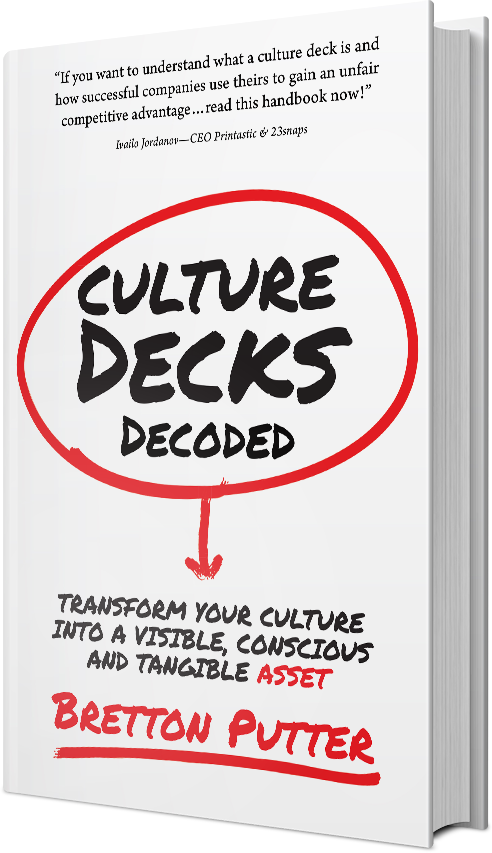 Transform Your Culture Into A Visible, Conscious And Tangible Asset

Differentiate from the competition.

Attract, recruit, and retain A+ talent.

Explain what gets an employee hired, promoted, or fired.

Communicate the culture, mission, vision, values, and expected behaviors of the company.

Illuminate how employees can make a difference and fulfil their potential.

I have interviewed and spoken with hundreds of founders and CEOs about their culture and one of the areas I explored during these interviews was how they had gone about creating their company's culture decks.

There are two main reasons why culture decks are hard to create: firstly, there are lots of culture decks available online but no overarching document that explains what an effective culture deck is, and what it should cover; and second, that very few people have the time to research all the different decks to learn how others have structured and written theirs. I wrote Culture Decks Decoded to solve both of these problems.

I’ve admired Brett’s take on the importance of culture for years now and have turned to him several times for counsel during turning points in my firm’s growth.  If you want invaluable guidance and insight into how to craft an effective culture deck for your company, this book is for you.
Colette Ballou CEO, Ballou PR

This book is brilliant! Brett really simplifies the process of creating a culture deck. The slides he has chosen give a fascinating insight into the culture of these high-performance companies.
Adam Posma CEO, ClubCollect